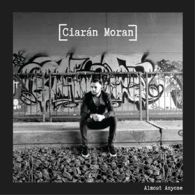 Up and coming Irish singer songwriter Ciaran Moran has given us the pleasure of reviewing his soon to be released debut single ‘Almost Anyone’. Ciaran has already supported Damian Dempsey as part of his ‘No Force On Earth Tour‘ and this single will be out at the end of the month.

Produced by Jackknife J, the single is best described in sound as a mix of dub and acoustic guitar. In my opinion, it would be a little along the lines of Alex Clare/Chase & Status, but with lyrics similar to something you might hear from Dempsey or Kerry group Walking On Cars.

Firstly, this track is that it’s not usually my cup of tea, but I can see where Ciaran is coming from. I do like the balance of the song in that he doesn’t take the dub sound too far beyond the meaning of the song. A song about life really, the lyrics are hopeful and so I think that if it had too much of an overpowering dub or electronic sound it would take away from the meaning. He keeps the sound and the lyrics balance and I think it actually works very well. The acoustic also add’s honesty to the sound and I can see the song getting its fair share of airtime.

‘Almost Antone’ is out August 30th and for more information on Ciaran and his music check out his Facebook page here or his Breaking Tunes page here.