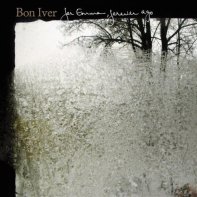 Bon Iver’s debut album. Does it need any introduction? Not really. Let me give you one anyway. ‘For Emma,..‘ was self-released in 2007 and it was in 2008 that I first heard the record. It was in college, and it became well known after being released through a label early that year. The story behind the recording of the album is also interesting in that Vernon had recently been part of the group DeYarmond Edision which had broken up. He became ill and left Raleigh where that group was based. He moved to his fathers cabin which was near enough to where he was actually from and began recording music. He was lost at this point of his life and following another break up he wanted to escape society and be left alone for a few months.

Though he says it’s funny to look back and see those months as “magical”, they must have been. ‘For Emma,..’ is a harrowing love story where you can hear the effects love, loss, the cabin and it’s isolation had on him. Some song’s are more upbeat obviously but there is certainly a lonely feeling to the record. We all know ‘Skinny Love’, one of the most respected tracks of the last 17 years, and along with ‘Flume’ they give the album that kind of international appeal. Vernon says that ‘Skinny Love’ is about his relationship with his ex-girlfriend Christy and how he was in the relationship for the wrongs reasons. He describes it as “Skinny love doesn’t have a chance because it’s not nourished”. It really is a beautiful and honest track and to this day remains as pure as it did upon release. ‘Lump Sum’ is a pacy track but I’m not quite sure just what it means. Perhaps it’s about giving things up and freeing yourself, but your guess is a good (or bad) as mine.

Songs like ‘The Wolves’ in its auto tune and layered glory show us Vernon’s talents and ability to blend all his inspirations together. A song I love is ‘Creature Fear’ because the life Vernon brings to it. Raising the volume and tempo of the record with a simple burst on the chorus really does affect the overall sound. ‘Team’ quickly moves in and continues this sound with the drum continuously beating and Vernon giving us some electric guitar. ‘For Emma’ is another great track with some life in it and the album is perfectly finished with ‘re:stacks’. The album as a whole is a brilliant piece of isolation turned into freedom. He created a unique sound and record that captured many emotions about love, loss and the isolation that created it.

‘For Emma,..’ is a classic of our time and I’m sure it’s class will not deteriorate. It’s one of the best albums ever in my opinion for it’s recording process, theme’s and unique sound. Since this release Bon Iver and Justin Vernon have gone on and gotten bigger, released two more outstanding records and continued to push the boundaries.

One thought on “Bon Iver – For Emma, Forever Ago”