IDLES played The Button Factory last Monday night and I was lucky enough to get a ticket. The gig was originally meant to be played in The Academy (I think), but due to demand it was moved. And by God was the crowd looking forward to seeing them.

The Button Factory. Haven’t been there since my college days but it’s actually a fantastic venue, especially for a gig like this. IDLES insisted on not turning on the AC so everyone could get nice and sweaty, seriously! 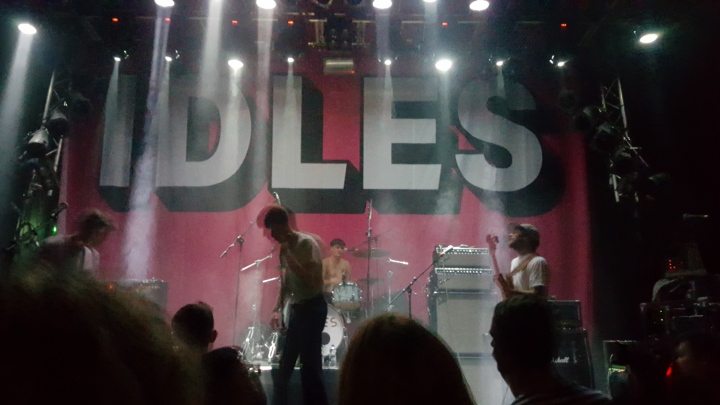 Heavy Lungs supported IDLES. Similar-ish in sound although more chaotic, they played 5/6 songs including Blood Brother; a track they’ve recently released and is absolutely worth a listen. They were good, couldn’t really hear the lead singer but that just came with the distorted sound they had going.

I didn’t choose that featured image for no reason. I chose it because it says a thousand words. IDLES were wild. They owned the stage. They were all over it and towards the end of the gig, so was a small section of the crowd. Though lead singer Joe Talbot didn’t talk to the crowd too much, the band certainly wanted everyone to be involved. They kicked off with the first 4 tracks of the new record and after that they mixed the two records. Two highlights for me were Mother and Samaritans because I just love those two tracks. Every track though was quality.

The night really peaked though on the second last track. In my excitement I’ve actually forgotten what track it was but who cares. Talbot came to the edge of the stage and started pulling people up. Then one of the stage guys came along and started pulling more people up. I threw out my hand of course and before I knew it I was making my stage debut. Talk about a rush, going mental on stage with the crowd going mad, absolutely fantastic. Fair dues to the band for getting people up too, I know it made my night anyway!

I was right at the front in the middle of the madness so most of the sound and visual aspects passed me by. However, they had their routine light set up and the songs did sound very close to how they do on the records.

Possibly the best gig I’ve ever been at. There are a couple of National gigs that are up there but come on, I was on stage with one of my favourite bands. That might just tip the scales. I’ll be looking forward to seeing them again and hopefully soon, I’ve a vague memory of Talbot saying they’ll be back in early 2019. Anyway, highly, highly recommended band and their show is definitely worth going to.

2 thoughts on “IDLES, The Button Factory and On-Stage Antics”