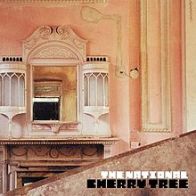 ‘Cherry Tree’ is an EP released by The National in 2004 in the run up to the release of the studio album ‘Alligator’. It’s a short one, as EP’s tend to be, and it was a clear indication of where The National were going following the release of the previous album ‘Sad Songs For Dirty Lovers‘. There’s a slight change in sound between this EP and the previous record, as The National seemed a little more confident in themselves. There’s a shift from a folk and slight country sound to something more alternative/indie. They stuck to their roots with the storytelling and lyrics however. This EP is perhaps best known for the track ‘About Today‘ which featured in the film ‘Warrior‘ and a few other films and TV shows.

The track ‘All The Wine‘ ended up making it onto ‘Alligator‘ and it’s fantastic as Matt Berninger struts his stuff and declares that he is a “perfect piece of ass”. I think it’s these easy going and cheeky lyrics that make The National so lovable, throughout their albums you can find Matt Berninger describing situations or emotional in the most laid back way possible. ‘All Dolled Up In Straps’ has become one of my favourite National tracks as Berninger almost sounds too bored to sing and there’s a soft and slow melody of piano, guitar and violin. Some light humming towards the end makes it a beaut, “oh poor sky don’t cry on me are you gonna fall apart again“. The next track up is the title track, ‘Cherry Tree’ and if you had been following The National up to this EP, this one would come as a surprise. Perhaps ‘Available’ from the previous record could compare to it with it’s intensity but it’s essentially a song which builds and builds with infectious lyrics that go “loose lips sink ships” over and over. Then all hell breaks loose. Only The National could make this song work, and it stands out in this EP as a benchmark.

‘About Today‘ comes in as the fifth track and this one has become one of The Nationals best known and most loved tracks. It’s actually perfect, the tone of the vocals and the desperate violin highlighting the lyrics makes it an unlikely yet undeniable, National classic. A live version of ‘Murder Me Rachel‘ follows and it’s ok, it does capture the intensity and passion of a live National show and how Matt Berninger acts, throwing in the odd shout and scream. However, it wouldn’t be one of my favourite National tracks. The closing track, ‘A Reasonable Man‘ features Padma Newsome of Clogs, a project Bryce Dessner and he have. It’s very soft but very good, it goes with the sound and theme of the album and the chorus is actually class! It’s probably the most odd track on the album as the production input sounds like it was minimal. But hey, fuck it.

Definitely add this one to your collect if your a National fan. You won’t be disappointed.