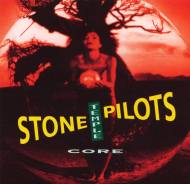 Core is the first album released by Stone Temple Pilots. Like many other hard rock bands such as Alice In Chains and Pearl Jam that came to prominence in the 90’s, STP had the hard rock sound, long hair, screaming vocals and drugs, except maybe they had a more consistent heavy grunge rock sound. You find with some heavy rock/grunge albums that there’s just no melody, and the banging and shouting just can’t pull it through. Similar to what At The Drive-In did with ‘Relationship of Command’, I think that throughout this album STP found those melodies, and that’s what makes this album quality 26 years later.

I’ve been a fan of this sound since college where I got into Queens of The Stone Age and Smashing Pumpkins, and STP were constantly on the radio in Vancouver, so I figured I’d check them out. Some people might know lead singer Scott Weiland from Velvet Revolver, but it was with STP that he established himself. Along with Pearl Jam, STP got a lot of stick from critics when the album was released,many labelling them ‘rip-offs’. But fuck critics right?

As soon as I got the album I loved it and got their second effort ‘Purple’ soon after. Many people might recognise ‘Interstate Love Song’ which came from this second album. Tracks that immediately stood out for me were ‘Wicked Garden’, Piece of Pie’ and ‘Plush’. ‘Plush’ did actually win a Grammy I think! Weiland spoke about the album when it was released as being about ‘humanity’, with songs such as ‘Wicked Garden’ representing the loss of innocence with lyrics  ‘I wanna run through your wicked garden‘ and ‘I wanna drink from your naked fountain’ creating a sexual theme. I just loved the sound when I listened to it for the first few months and didn’t actually read too much into the lyrics. ‘Piece of Pie’ is another headbanger and a song I still listen to on a regular basis. Its the perfect grunge song for me and I would put it up there with Nirvana’s finest because it has the right ingredients, slaying and shredding guitar, Weiland creating a a melodic vocal sound to match, and that savage break where they just let loose on guitar and go for it. So its both heavy rock, but also an enjoyable song musically.

‘Plush’ is probably the most radio friendly song on the album, hence it is one of the most recognisable songs off the record. Its catchy but it stays with the sound of the album, not changing just to sell copies. The first track ‘Dead & Bloated’ and the last track ‘Where The River Goes’ are also two standout tracks, but its the feel and sound of the album as a whole that makes it stand out amongst the numerous albums released in the same genre at the time. Its not the standout tracks that make the album, its quality from beginning to end.

When I reviewed ‘Blue’ by Joni Mitchell I said it was important to have a listen through all era’s and decades of music to understand what was happening at the time. If you start listening to a certain genre, trace it back to the beginning an hear for yourself what it was like when it started. The grunge scene in Seattle in the early 90’s is famous, but down the road in San Diego the Stone Temple Pilots stole some of their spotlight and fans still appreciated that to this day.