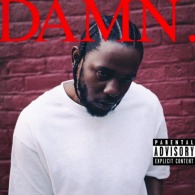 Now that Kendrick Lamar’s ‘DAMN‘ has had time to settle in, I think it’s time for a review. I’ve been a big fan of Lamar for about 3 years, some time after the release of ‘Good Kid, M.A.A.D City’. I stumbled across him in a (hipster) coffee shop in Vancouver where his music was blaring and all the male barista’s had a mustache. ‘Good Kid,..‘ was my first port of call and I was blown away by it, I couldn’t find fault and I was sickened I hadn’t been listening to him years before.

A few years ago, 2013 I think, during an interview with Zane Lowe, Kanye West said “rappers are the new rock stars, and I’m the biggest of all of them“. He’s right about rap being the new rock, but he’s the biggest star? Not anymore. If he even was at the time it was only because of controversy. Kendrick Lamar has now taken over and kind of become a benchmark, creating stories people such as myself can understand, and music a badger with no ears would be drawn to. If rappers are the new rock stars, and they pretty much are, Lamar is John Lennon. With every new record there is a world of excitement, people anticipating what direction he’ll go in next. In an interview with Rick Rubin before the record came out he said of his 2015 landmark record ‘To Pimp A Butterfly‘ that that was just who he was at the time and what he was feeling. So with that, he made no promises that he was going to continue to try to take down the man.

What we got with ‘DAMN’ is something special. ‘TPAB’ is massive, monumental, influential and it will be referred to for years to come. ‘DAMN’ is probably his most experimental record yet but there’s still his ability to make every track count. He remains a storyteller and keeps up the spoken word trend he does, the opening track ‘BLOOD’ telling the story of a woman he tries to help only for her to kill him. ‘DNA’ follows up and is one of the best tracks on the record, he blazes his way through 3 minutes rapping about who he is and what he is seen as. It’s probably the most fierce track on the album and the one where he vents his rage most. It also includes a clip from a Fox News report when they made reference to his BET Awards performance, “This is why I say Hip-Hop has done damage to young African Americans than racism in recent years”. Don Cheadle appears in the video too. ‘YAH‘ cools down the tone but he once again makes reference to the Fox News incident. ‘ELEMENT’ for me is one of the most catchy tracks on the record. I don’t think he plays it safe with this album but this is a more direct hip-hop track, a sound which could be found on many other artists records. Still though, his lyrics set him apart, his flow is unreal and the chorus is actually kind of funny. Next up is ‘FEEL‘ and it’s a much more straight forward effort as he goes through his emotions and worries and wonder’s whose looking out for him while the world look to him for answers. The track turns aggressive towards the end, which I like because it shows his passion for what he is saying.  ‘LOYALTY‘ is a track I have mixed feelings about as I’m not sure if it fits rightly in the album. It features Rihanna and has a pop feel to it, which I understand he might have felt he needed, but I’m not convinced yet.

‘PRIDE’  and ‘LUST’ are two tracks that I do like but are perhaps a little overshadowed by the the rest of the album. Lamar talks about his pride and also brings a religious theme to ‘PRIDE’, using a lower tone of voice for most of the track as if he is sorry for feeling proud. ‘LUST‘ to me is about making the most of what you’ve got. He raps about how men and women waste their day, dreaming of bigger things but falling back into the same useless routine. There’s also sexual references throughout and I actually like the beat on this one.

My three favourite tracks on the record are ‘HUMBLE’, ‘LOVE’ AND ‘XXX’. There’s something unique with these tracks that have me playing them on repeat. ‘HUMBLE’ is bold and rough, featuring an older hip-hop sound with a hint of 2017 and Lamar cements his place on top of the rap world. He wants us to be humbled by his presence and lyrics, and the video also highlights this. ‘LOVE‘ features a Soundcloud artist called Zacari and although it is a pop-ish track like ‘LOYALTY’, I find it far more infectious. I think of ’21 Questions’ by 50 Cent and the meaning of the song when I think of ‘LOVE‘. Lamar is asking questions of this woman in his life and whether she would stick around in certain situations and if he didn’t have what he does have. It’s a hip-hop love song I guess. ‘XXX’ is absolutely unreal. As in, one of the best hip-hop songs I’ve ever heard. It’s about three songs in one and features, yes features, U2!! That’s a pretty impressive haul in fairness.  There’s a religious theme to this track so the U2 feature makes sense, but there’s also a violent tone as he talks about the death of a friends son and retaliation.

‘FEAR‘ follows and Lamar gives us a front row seat to his thoughts and fears, as he talks about his rise to stardom and the pressures of continuing his success. It’s an open and honest track and you can see things from his side and see that being the biggest hip-hop star on the planet ain’t all roses! ‘GOD’ is another track I love. “This what God feel like” he raps as he talks about the other side of success, how it has made him feel like a God. He’s always dreamt of success and now that he has it you can’t take it away. It’s actually catchy as hell too. We’re see out by ‘DUCKWORTH‘, a story about Anthony ‘Top Dawg’ Tiffith and Lamar’s father, and how Tiffith was going to kill Lamar’s father but ended up deciding against it only for Lamar and Tiffth to end up recording together. I guess you just have to hear it. Lamar see’s us out with “So I was taking a walk the other day..”

He cements his claim to the hip-hop crown several times over throughout this record, be it with the flow of his lyrics, how he uses different genres and still makes it effective, his star studded features or the most obvious, his storytelling. It’s a great time to be a rap/hip-hop fan because on one side of the pond you have that simple catchy rap and on the other you have guys like Kendrick Lamar and A Tribe Called Quest, and possibly J.Cole and Joey Bada$$ now. I doubt you haven’t heard some of this record by now but if you haven’t heard it all, get it. Just as ‘TPAB’ was before it, ‘DAMN’ will has rasied the bar and left everyone else clinging to the side of the boat.