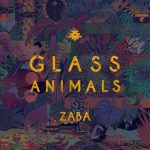 ‘Zaba‘ is the debut album by English band Glass Animals released in 2014. I hadn’t heard of them until I came home last summer and a few friends were raving on about them. So what’s all the fuss about?

A strange mix of hip-hop beats, jungle sounds and alt/indie rock makes up the album. It’s strange but for the most part it works so well. A lot of people have pointed out similarities with alt-J, and the similarities with alt-J are evident throughout with the sound and also the lead singer, Dave Bayleys vocals. The big difference is that ‘Zaba‘, is better than ‘An Awesome Wave‘, and you can fuck off if you think otherwise. Granted, ‘An Awesome Wave‘ was creative when it debuted, but ‘Zaba‘ outshines it. Anyway, back to Glass Animals.

I’ll start with the singles released and ‘Hazey’ since I’m listening to it now. I’ve really no idea what it’s about but the mix of instruments lead by hip-hop beats and an ooze of swagger makes this as catchey as syphilis. ‘Black Mambo’ opens with a simple drum beat followed by some deep bass and this one highlights the variety within the album because it sounds a little more like a normal alt-rock track. Still catchey as hell and laid back because Dave Bayley pretty much talks the lyrics to you. One of the most catchey songs is ‘Gooey’ and it’s brilliant. If this comes on at a house party or on the dance floor you’ve no hope, before you know it you’re making shapes you didn’t know existed. Look up catchy in the dictionary and this track is used as the description. Dave Bayleys voice suits this sound so perfectly that Glass Animals will probably be haunted by calls for “GOOEY’ at every gig they play till they pack it in. If you haven’t heard it get on it NOW!

The opening track ‘Flip’ is a good indication of what’s to come, beats and jungle sounds.  Some howling, low tempo before everything comes to the fore and finishes strong. It’s definitely a track that will give you hope for the record, a track that will have you thinking, “ya ok, this could be special”. ‘Toes’ and ‘Wyrd’ are two tracks I really enjoy too. ‘Wyrd’ is a little more out there and risky but it works very well. The instrumental ‘Intruxx’ is a nice filler to split the album, jungle sounds, birds an’ shit, guitar and drums. It’ll do. ‘JDNT’ doesn’t do much for me so I haven’t much to say about it. You hear that track in the album already if you know what I mean. ‘Walla Walla’ is also ok, saved by its catchey low key chorus and a funky finish, but it’s nothing to make the hair in your nostrils stand. ‘Cocoa Hooves’ comes in a track shy of the end and it’s the real deal. “Why don’t you dance like you’re sick in your mind“, good fucking question Dave. Great, odd lyrics and excellent use of the tools at there disposal make this one a contender for best track.

Overall, I love this one. My first few listens weren’t great but it quickly grew on me.  They’ve released a second album which I don’t have for some reason but by all accounts it’s a solid follow up so that’s on my list. Now go away and check them out.