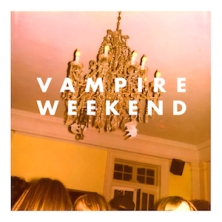 I’ve to admit something before I start. When I first heard ‘A-Punk’ I thought Vampire Weekend were just another blip in the ocean of average one-hit wonder bands that were floating around in the late noughties. I thought “fuck sake, everyone going mad again for a shit 3 something minute song”. Oh I was sooo wrong. Once I heard the song properly and gave them a chance, I fell for them. This album is a stand-out of the noughties for its sound. In a weird way it reminds me of Paul Simon, and I don’t really know how to explain that, though he has said that he doesn’t like the album. It’s outrageously fun and perfectly balanced between pop and alternative.

‘Vampire Weekend‘ was released in 2008 and the song ‘A-Punk’ became a hit especially amongst college students. You couldn’t get pissed at a house party without hearing it 17 times before midnight. The quirky Vampire Weekend sound is evident in the first three tracks, ‘Mansford Roof’, ‘Oxford Comma’ and ‘A-Punk’. So cleverly written, including a Lil Jon reference in ‘Oxford Comma’ “first the window, then its to the wall, Lil Jon, he always tells the truth”. Vampire Weekend are able to pull off a stunt like this because they’re so lovable. Some bands have this lovable vibe but it soon wears off once one realise their music has no lasting value, but with Vampire Weekend I didn’t tire of it, I thoroughly enjoyed it and became a fan. I won’t go naming names, but if you’re reading this you can surely think of several such bands. ‘Mansford Roof’ and Oxford Comma’ are the kind of songs you should be listening to on a summers day, sitting in your garden with a lemonade. Care free, breezy and happy. ‘A-Punk’ is one of their most memorable songs and that’s because its catchy but it also had the “eh eh eh” which everyone sang along to. ‘Cape Cod Kwassa Kwassa’ was also released as a single and begins to introduce other instruments to the album such as hand drums and features the keyboard more prominently. An explanation for the Paul Simon similarities could also be found here with the African vibe.

The fun continues with ‘M79’ and ‘Campus’ which keep the chilled sound going before ‘Byrn’ and ‘One’ come in to spark a bit more of buzz into the album. The use of guitar on the album is refreshing because it takes you back to the original indie and alt rock sound that sounded like it was only intended for people to have fun and be forever young. It’s not harsh or loud, it really contributes to the song and can make you feel as though you’re not just listening to it in your living room or on the bus on a rainy Monday. ‘I Stand Corrected’ is up next and I love this song. The drums make the song because they are so simple and effective, but it’s also what the song means to me that makes it enjoyable. I understand it as taking that leap or chance on someone despite it going against the norm  and what everyone else might want. Be care free and do what you feel is right.

Not to save the best for last because the album is brilliant, but one of the best tracks, ‘Walcott’ serves as the almost finisher. Hands down one of the best pop songs from Vampire Weekend in general. It has the violin, the piano, big loud drums and perfect structure.The guitar comes flying in towards the end as the song seems to peak, only to come back around for everyone to join in the madness. ‘The Kids Don’t Stand A Chance’ closes out the album in beautiful fashion once again showing the talent within the group. I’m a lucky man for being able to admit I’m wrong and go back to actually give Vampire Weekend a listen because this album is a treasure and will surely be a benchmark future bands aim for in years to come. It’s a modern classic.