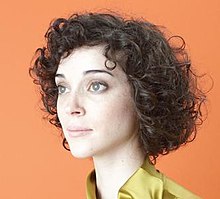 I’ve known of St.Vincent since about 2012, so not long. However, I took a special interest in her after I had seen that she appeared on a National record. I did a little research both online and in-store and discovered that she had a few records, so I thought I’d treat myself. ‘Actor‘ was the first record of her’s I picked up, I think just down to the cover art really! You may have heard her on the radio more recently as her last two records, ‘St.Vincent’ and ‘Masseduction‘ have really turned her into a more global star and rightly so. She makes great music and doesn’t seem to give a shit about what people think!

There’s one or two interesting little stories behind the making of the record. Annie Clark (St. Vincent), watched old Disney films from the 30’s and 40’s but did so with the sound off. She would fight writers block by then writing music for her favourite scenes. She also changed producers at the last second which she says “saved the record”. I’ve listened to most of her work but I only own 3 of her records. Each of the records feature her now signature style, cheeky lyrics and distorted guitars. Her first record, which I haven’t heard, is meant somewhat of a different sound.

So what can you expect from ‘Actor‘? A far out mix of sound a lyrics. You’ll have to give it 2 or 3 listens to take it all in. Not that you won’t see how good it is on the first listen, it’s just layered, so it takes a few. You probably know some tracks such as ‘The Strangers’ and ‘The Party’. ‘The Strangers’ has a sense of desperation in the lyrics and heavily distorted guitars which actually summarise the situation the character is in really well. ‘The Party’ is just beautiful. None of the tracks here are overdone or too long. She knows how to get the most out of each track and not go too far while still pushing the boundaries at the same time. There’s a clever use of backing vocals here too, such as ‘Save Me From What I Want’. They give the songs a vintage edge which actually does fit with her Disney concept. There’s also a great pop sound to the record. You get the best of both worlds, some upbeat, pacy tracks such as ‘Actor Out Of Work’ and more meaningful, slow tracks such as ‘The Bed’ and ‘The Party’. You get to hear all of her brilliance in a range of sounds and lyrics.

Anyone that follows my posts probably knows of St.Vincent so there’s no point in me telling you to give her a listen. Her star is on the rise and it’s great to see a genuinely talented person, making great music with a distinctive sound making it. I missed her shows in Dublin recently which I’m still burning over, but I’m sure I’ll catch her in the future. At least it gives me more time to get to know her music inside out!