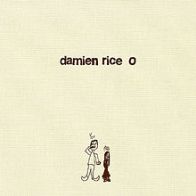 ‘O’ is the debut album by Irish singer-songwriter Damian Rice. The album was released in 2002 and is dedicated to Mic Christoper who died in 2001. Something about Rice that I didn’t know was that he was in the band Juniper. They split and Rice took off on his own adventure while the rest of the group formed Bell X1. Now, you learn something new everyday! Even if you don’t have this record, I’m pretty sure you know who Damian Rice is and also his single ‘Cannonball’ which was released from this record.

To me, and almost everyone who listened to the record, it is one about love, loss, heartbreak and anger. I had heard during interviews that he was depressed around the time of making this record. I’m not quite sure how much of that comes across, but it certainly is a soundtrack for the heartbroken. There are many more elements than just sorrow to the record and that evident throughout. Lisa Hannigan’s presence for one offers a softer side and also the way his tone changes in certain tracks. It’s as if he is damaged goods, questioning his ex but still keeping himself together. There’s still an anger there and he uses it to his advantage and it makes for a brilliant record.

In a lot of the songs there remains some hope, such as the opener ‘Delicate’ which is a song about loss but also leaves you with a hopeful feeling. Perhaps it’s the music or his anger towards the end as he searches for answers. This anger is evident in many tracks, such as ‘Cheers Darling’ and ‘I Remember’. In ‘Cheers Darling’ you can almost see him at this party with a glass of wine in his hand, huddled in the corner watching the girl he has missed out on flaunt herself all over her new man. Friend-zoned I’d say. A brilliant track where you can hear his disgust and jealousy although he tries to play it off. ‘I Remember’ is a personal favorite from the record. Just fucking awesome, total rage on Rice’s versus, completely changing the composition of the song from what Hannigan starts with. It comes out of nowhere and grow in anger and sound and it really does stand out on the record.

‘The Blower’s Daughter’ is another well know track from the album. It appeared in some film called ‘Closer’ in 2004, but I haven’t seen it so I don’t know how it works in the film. Regardless, it’s a well laid out love song which again features Hannigan as she plays the role of the love interest who seems to have left him behind. ‘Cannonball’ follows and well, we know how that one goes. Bit disappointed to see him give The X-Factor the rights to use it a few years ago but sur look, handy cash. Three of my favorite tracks follow ‘Cannonball’ in ‘Older Chests’, ‘Amie’ and ‘Cheers Darling’ which I spoke about earlier. ‘Older Chests’ is such a longing song. The violin and bare guitar of the chorus takes you to another place. The story of parents and their separate lives, the fathers addictions and the mothers attempts to give her children the best she can. He also explains time through situations, such as “older gents” who have seen their city change before their eyes. Truly brilliant stuff. ‘Amie’ is another track I love. Stand out violin and Rice at his best makes it an excellent track to split the album. This is also the track where the album title is taken from. Rice sings “Amie, come sit on my wall, and read me the story of O”. There ya go.

‘Cold Water’ is another popular track because it was featured in a few ad’s and films. There is a beautiful opening to this track which is probably what makes it so appealing. Rice keeps his voice soft to match the theme of uncertainty as he appears lost but still clinging to his lover. She’s all he has left as he feels himself slipping away. Some creepy ass tenors come in to take the song in direction you wouldn’t expect before finally drums bring the song to life. ‘Eskimo’ is the final track I must mention but it’s really three songs adding up to some 16 minutes. Rice uses his tenors again in ‘Eskimo’ a song he wrote about not being able to write songs. Now he says writing songs is like going to the toilet, it just hits him. ‘Prague’ follows on and is a serious track. Loud and angry, there is a different sound to this one as it’s distorted. Rice is pissed on this one as it seems he is all set up for this girl, a girl who already has a boyfriend. It seems to be a waste though as he congratulates her and her lover as he did on ‘Cheers Darling’. Lisa Hannigan see’s us out with a beautiful cover of silent night, and the album closes.

There are many classic break-up records out there and ‘O’ is one of the favorites. Will it grow it time and become a classic? Who knows, maybe. It’s a beautiful effort and when I listen to it every now and then it takes me back to when it came out and all these other Irish acts and bands were making themselves know. There was pop, rock, folk, indie and Mr. Rice.